PITCH ONE – Ladies and Gents there Is a Beta & It Includes Virtual Reality and a movie.

Julia’s DA is best summed up in her own words – “The relationship between games and cinema expressed by the technology of Virtual Reality.” It is a video essay, focusing on five parts, analysing the game media text of “Ready Player One”

Sheng’s DA is an introduction to massively popular games like League of Legends, and a history of how they got to where they are. 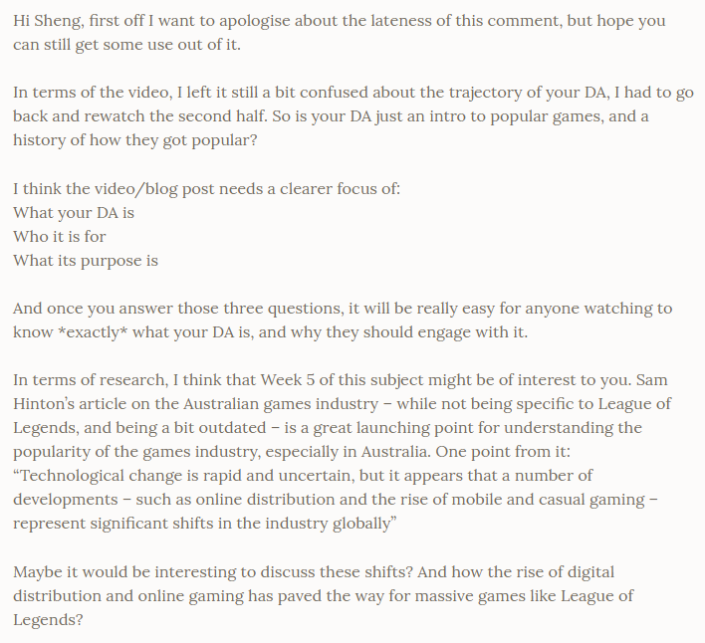 Chris’ DA has changed, originally being about brand exclusivity in gaming, it is now about microtransactions, in the form of a podcast.

The main issue with the quality of the comments I provided would be to do with the timing of them. For personal reasons, my comments were late, and I am worried that their DA’s have since progressed past the point where my feedback can provide any value.

I did my best to engage with each post, offering course-relevant research and readings from the Moodle site. I also suggested Sheng and Julia offer a clear idea of what exactly their analytical framework is.

I hope my suggestions come to some use for the students whose blogs I commented on. As mentioned in the reflection on the first round of comments, I feel uncomfortable offering people research, as for the most part I assume that it is research that they are already on top of. I felt the same way in this round of comments – like I didn’t really have too much to offer to these students,  as they seem to have their DA’s pretty well thought out.

This entry was posted in BCM215.

One thought on “BCM215 Critical Self-Reflection of Comments – Part Two”

Reblogged this on Game Cultures.

There was an error retrieving images from Instagram. An attempt will be remade in a few minutes.